Well, last year in August i’ve tryed to install Ubuntu in my LG E300 and after some tests and searching my system has been installed with Ubuntu 8.0.4, after some bumping in X config. But wifi was a pain in the ass situation to solve. The absence of the FN keys to activate/deactivate wifi + bluetooth have made me abandon the use of Ubuntu in the laptop.

However in that time, i’ve manage to get more satisfying results with Ubuntu than with Fedora.

This time, with the new Ubuntu 9.0.4 no problems at all. Released 23 April 2009, this new version comes in solving all the problems felt in the past.

The OS installed flawlessy, and Wifi, Bluetooth, and the “infamous” FN + KEY combination all worked out, directly out of the box.

This means no tricks or difficult hardware setups, no X troubles, not even using the madwifi drivers was necessary.

I even used to activate the madwifi drivers because of an auth error in Wifi with my Thomson TG787, but after all i’ve reverted to the original drivers to Atheros, because after some testing the madwifi drivers didn’t detected any wireless networks.

Even a simple terminal server client to connect to a Windows Box usting Microsoft’s RDP was bundled and works great.

And the system is installed, a dual boot Ubuntu / Vista, which is now super quick booting and shutting down (i recentely upgraded my laptop RAM to 3GB and it has revealed to be an astonishing performance factor) specially in Ubuntu. 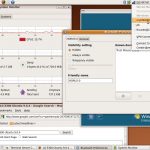